Putting the Why Into Conjoint

Conjoint models typically provide the “what” but very little of the “why” in customer behavior modeling. Conjoint models may tell the analyst to what degree various product features, a range of prices and/or a variety of brands each affect ultimate product demand but they do not comment on why customers may have been motivated by those features, prices and brands. Generally speaking, conjoint models tell us what product features to offer, what price to sell at or how much we will sell but they can’t tell us the underlying psychological motivations that cause customers to respond to various product attributes as they do.

If we could gain some insight into the psychological motivation behind product attribute utilities, we would have a potentially powerful basis for developing marketing communication programs and overall marketing strategies that could shape customer behavior to our advantage.

For example, if we were to discover that end-users’ utility values for some specific type of office machinery, derived from a choice exercise, were depressed by the end-user belief that using that type of office equipment gave co-workers the impression they were wasteful and irresponsible with company assets, a communications strategy could be developed to dispel this belief. With this belief dispelled, end-user valuation of using that type of equipment would increase (as reflected in larger utility values) and end-users would use it more, or at least would want to use it more, if it were available to them.

If consumers of a given packaged food were motivated to purchase that item because they felt a particularly strong and unique connection between the product and their mothers and their mothers’ values, that connection could be leveraged through marketing to make those consumers virtually price insensitive, thus increasing profit margins substantially.

If a complex model could be built which identified underlying attitudes and beliefs that drove magnitude and sign of the utility values of many product attributes in a choice exercise, a comprehensive marketing strategy could be developed to overcome purchase and usage barriers and simultaneously take advantage of purchase and usage “hot buttons,” at the psychological level.

Conjoint utilities, specifically brand utilities, have been used as dependent variables in secondary models for several years.  An extension of this approach would be to include several product attributes, not just brand, in a complex model of simultaneous equations as multiple dependent variables.

The confirmatory factor analysis portion of the structural equation model is called a measurement model.  A simple measurement model is illustrated below in Figure 1.  The phrase “yadda yadda” has been used to mask the identity of the product category and any proprietary information gleaned from this analysis.

The arrows leading away from the elliptical shapes represent the relationship between an individual statement (shown as a rectangle with rounded corners) and a latent factor (the ellipse).  The number next to the arrow reflects the strength of relationship.  The larger the number, the more strongly the statement loads on the factor.  The double-headed arrows reflect covariance between factors.  By closely examining the load factors and covariances, potentially rich and nuanced interpretations of the latent factors can be developed. 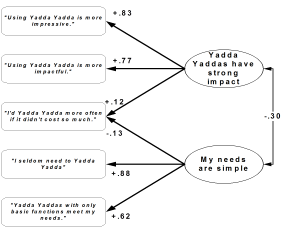 In Figure 1, for example, it can be seen from the covariance of -.30 between factors that the more a respondent feels their needs are simple, the less likely they are to feel that the Yadda Yadda device is impactful.  Further, the factor loading of -.13 indicates that if they have simple needs, they tend not to believe they would use the Yadda Yadda more if it didn’t cost so much.  Conversely, the load factor of +.12 indicates that if they feel the Yadda Yadda is impactful, they would use it more if it didn’t cost so much.  Clearly there are some linkages between perceptions of need, impact and price sensitivity.Factors derived in the confirmatory factor analysis can be included as independent variables in the regression models.  There can be multiple regression models allowing for multiple dependent variables.  The regression model portion of the structural equation model is called the structural model or the causal model.  A structural model is illustrated below in Figure 2. 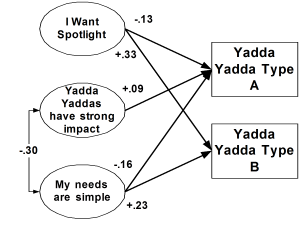 Hypothetical models are specified based on current category understanding.  Survey data are fitted to these models and the fit is evaluated using classical statistical measures.  In this way, hypothetical customer behavior dynamics can be confirmed or denied by validating or rejecting a specific hypothetical model structure.  The final model structure reflects valid causal relationships between attitudinal factors and product attributes, creating genuine insight into customer attitudes that motivate relevant behaviors.

Attitudinal and belief factors can be derived from attitudinal statements in the survey instrument.  By using multiple attitude statements to derive latent factors, reliability and validity of the attitudinal factors are greatly enhanced.  Individual-level utilities, derived in the conjoint analysis, can be used in the SEM as dependent variables.  The attitudinal factors can be regressed against the individual-level utilities derived from the conjoint analysis in a series of simultaneous linear regression models.

A simple path diagram of a fictitious SEM designed for use with conjoint utilities as dependent variables is shown below in Figure 3 to illustrate the suggested model framework. 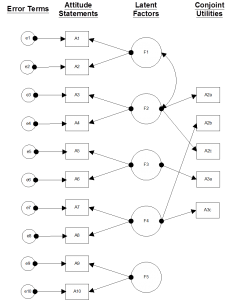 Commercial models will be substantially more complex. One can see in Figure 4 an SEM example based on a commercial dataset. This SEM displays a complex web of variable relationships; observed to unobserved, observed to observed and unobserved to unobserved. Each line in the path diagram in Figure 4 represents a statistically significant relationship between two variables. It is important to note that the analyst must also test each potential model parameter for interpretability. Given the large number of potential parameters that could be included in the model, the likelihood of spurious relationships can be very high. SEMs must be built with an eye toward reasonableness as well as statistical significance.

Figure 4 below demonstrates that SEMs have the potential to identify and quantify extremely complex relationships between attitudes and product values (conjoint utilities).  Understanding these relationships can create rich interpretations of market dynamics that could have significant impact on business strategies. 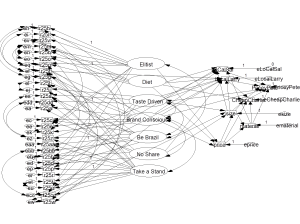 A division of HP recently conducted a large-scale choice-based conjoint study online, among decision-makers for a certain type of hardware device.  The attributes of brand, price and device type were among those included in the conjoint design.

As part of the research process, a pilot study was conducted online in which ratings were collected from a sample of 251 members of the target population for approximately 100 attitudinal statements.  These data were analyzed using a combination of exploratory and confirmatory factor analysis to reduce the number of attitudinal statements included in the final survey to 30.  The 30 statements loaded onto 11 latent factors.  Sample size in the final survey was approximately 1,500 decision-makers.

By building an SEM which used latent attitudinal factors as independent variables and choice utilities as dependent variables, numerous interesting relationships emerged (Note: findings have been altered as well as masked to protect proprietary information).

One finding of the structural model was that the latent factor “Yadda Yadda use is a hassle” was a key barrier to the purchase decision (see Figure 5).  That is, the belief that the Yadda Yadda device caused difficulties for the purchaser after purchase was a primary reason that they didn’t buy Yadda Yaddas (-.47).  Obviously, from an engineering standpoint, the Yadda Yadda device should be examined to determine if the “Hassle” perception is justified.  If so, the device must be redesigned to remove the objective Hassle component from its operation and/or maintenance.  Whether the Hassle perception is justified or not, any successful marketing communications strategy will need to address and remove this perceptual barrier from the minds of prospective customers. 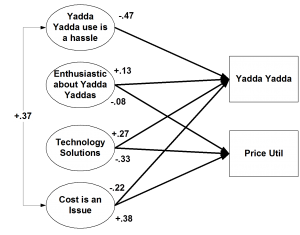 Other findings of the SEM analysis with strategic implications included:

Thus, encouraging choosers to put their faith in technology will not only increase Yadda Yadda sales but also increase profit margins, a potentially important marketing insight.

Coca-Cola conducted a large-scale choice-based conjoint study in the category of non-alcoholic beverages in Brazil.  The attributes of brand, price and container size were among those included in the conjoint design.

As part of the survey, ratings were collected on 30 attitudinal statements felt by management to potentially influence the soft beverage purchase decision.

Sample size was approximately 3,300; slightly less than 400 per each of nine regions within Brazil.

In the measurement model part of the SEM, the 30 attitudinal statements loaded onto seven latent factors.  The results below have been altered and masked to protect proprietary Coke information and strategies.

By examining the regression coefficients from the structural model, SEM results can be summarized as:

Strategic implications of these results include positioning strategies for both Pricey Pete and Lo-Cal Sal.  To take advantage of the new understanding of the psychological motivations behind the soft beverage purchase decision Pricey Pete should be positioned as:

Lo-Cal Sal should be positioned as:

A large table in a restaurant, crowded with Brazilians having a raucously good time.  Everyone is talking, shouting, gesturing, laughing.  They are happy and self-confident, none of them super-models; all real Brazilians: handsome but believable.  All are aspirational figures, professionally well-dressed, successful, upper-middle class.  There are large bottles of Pricey Pete being passed around, glasses being filled and emptied.  A tag line appears on the bottom of the screen: “Pricey Pete: the taste of Brazil”.

An illustration of the type of marketing communications creative strategy that can be developed from the above analysis is the following scene:

A large table in a restaurant, crowded with Brazilians having a raucously good time.  Everyone is talking, shouting, gesturing, laughing.  They are happy and self-confident, none of them super-models; all real Brazilians: handsome but believable.  All are aspirational figures, professionally well-dressed, successful, upper-middle class.  There are large bottles of Pricey Pete being passed around, glasses being filled and emptied.  A tag line appears on the bottom of the screen: “Pricey Pete: the taste of Brazil”.

Conjoint models typically provide the “what” but very little of the “why” in customer behavior modeling.  Generally speaking, conjoint models tell us what product features to offer, what price to sell at and how much we will sell but they can’t tell us the underlying psychological motivations that cause customers to respond to various product attributes as they do.

By linking attitudes to utilities via Structural Equation Modeling, we are able to gain some understanding of the “why” behind the “what.”  Further exploration of this technique is needed to further enhance its productivity but it is clear that there is great potential for discovering powerful strategic insights from this approach.

Prior to founding MACRO, Mr. McCullough was the senior vice president for a leading international strategic consulting and design research firm. Before that, he was market research manager for a $300 million division of Levi Strauss & Company. Mr. McCullough has spoken before the American Marketing Association, the Marketing Research Association and various universities on a wide range of marketing topics. He is a past board member of the American Marketing Association, San Francisco chapter, and has been quoted in Canadian Packaging Magazine. He has chaired and lectured at applied multivariate statistics seminars for several years and is a member of numerous professional associations.
© Copyright 2022 MACRO Inc.
Privacy Policy
Site Map